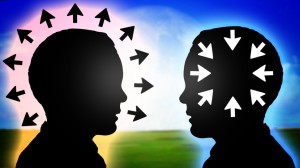 One thing that is certain about humans…there are “reasons” for everything they do, feel or think…even though it is sometimes hard to figure out. Remember when you asked a child “why did you do that?” and got the response, “I don’t know?” Well, they might not be able to explain why they did something, but nevertheless there are reasons for their behavior and that of all people. Just like that child, it is often difficult for us to understand why we ‘think like we think,’ ‘feel like we feel,’ or ‘act like we act,’ in many instances of life.

The study of human behavior is largely what Psychology is all about. “Why do people act the way they act, or feel the way they feel?” Those are the questions that have been studied for Centuries. Many of those answers, however, can be found in the revelation of the human Temperament…or Personality.

The study of the Human Personality is ancient…some dating it back to Hippocrates who lived some four-hundred and fifty years before the birth of Christ. It has been researched extensively all the way up to modern times and is used as a dynamic diagnostic tool in both Psychology and Psychiatry to this day.

A generic explanation of the “Temperaments” or “Personalities” is that every human is born with genetically inherited ‘behavioral tendencies’ that are as much a part of their DNA as their eye color or finger-print.

There are numerous versions of this science they are generally broken down into four major categories. Remember…all humans, (with the exception of someone with a personality disorder or severe mental illness), will fit into one of these four categories.

In all honesty, we have a degree of all four of them within us…but will test higher in one, with a close secondary.

EXTROVERTED PERSONALITIES:
The Choleric and Sanguine personality-types are extroverted personalities. This means that they are more “out-going” more “sociable” and more comfortable in a crowd…and even standing out in that crowd.

INTROVERTED PERSONALITIES:
The Melancholy and Phlegmatic personality-types are introverted personalities. This means they are more likely shy, feel anxious about being in crowds and especially being confronted or singled-out in a crowd.